ne of the most intruiging persons in the more recent history of Japanese martial arts. After having immatriculated himself into Waseda and Meiji Universities, where he dropped out of, he worked for a Newspaper company. Afterwards he started his career as a professional Ninja. Opinions are divided if he was a real Ninja or a mere Budô researcher. For certain reasons the world of academics refrains from using his works for scientific research in fear of being dismissed from the academical world, as Fujita is thought to have been a highly unethical person. The reason for this is his work for the Japanese Imperial Army and his supposed real-life testing of Atemi waza.

In his life he taught at the following institutes or functions:

Fujita Seiko was a Bujutsuka and heir of the Kôga-ryû Ninjutsu. Born in Tôkyô as Fujita Isamu, he called himself the „14th generation master of Kôga-ryû Ninjutsu“, bearing the nickname „the last Ninja“ (Saigo no Ninja). Fujita himself wrote:

Not everybody can become a Ninja, as one would need to possess the neccesary qualities. Unfortunately, I haven’t met such a person. That’s why I am the last Ninja of Kôga-ryû.

As nowadays there is a living tradition of Ninjutsu taught by Kawakami Jinichi, Hatsumi Masaaki and others, it is questionable if Fujita Seiko actually was the „last Ninja“ in the strict sense of the word. But one may say that this is just a kind of a slogan pointing to the fact that he was the last Ninja person officially affiliated to government institutions.

And in Japan, Fujita Seiko is the most famous of all Ninja.

Additionally he acted as managing director of the prestigious Nihon Kobudô Shinkôkai and as an advisor to the Nihon Karate-dô Kai, and he also run the so called Shûrei Tanshin-kai, which consisted of the „Fujita-style psychotherapy medical treatment method“ and „Fujita-style soul and body training method“. 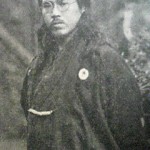 In his time as a „living god“ or „holy person“ he bore the nickname Yôkei An Yûrei Sennin, which means kind of: the taoistihe hallow „phantom from the monster-hermitage“. 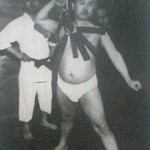 Fujita swinging weights attached to his chest. In the background: Konishi Yasuhiro (Sôke of Shindô Jinen-ryû). 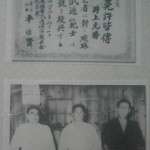 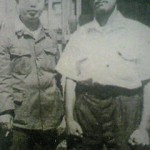 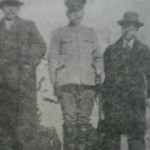 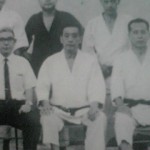 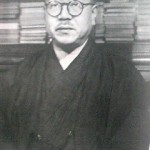 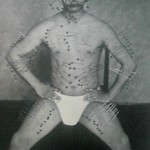 Fujita Seiko while practicing Yoga, with 500 big tatami needles stuck through parts of his whole body.


During the War in the Pacific (1941-45) he conducted training in Nanban Sattô-ryû Kenpô in the Army Academy of Nakano (Rikugun Nakano Gakkô).

After the war he taught Mabuni Kenwa (founder of Shitô-ryû) and moreover various teachers of Shitô-ryû in his Nanban Sattô-ryû Kenpô. Among these it was Iwata Manzô who – except for Kôga-ryû Ninjutsu – became heir to Fujita’s styles.

Fujita established a collection of classical literature on the traditional martial arts of Japan. This extensive collection of materials he bequeathed to the city of Odawara, where it is stored today in the municipal library (Odawara Shiritsu Toshokan) as the “Fujita Seiko Bunko”. This „Fujita Seiko Library“ is used today by researchers of Budô history.